It’s been a while since the last update, but we’ve been working on a bunch of new levels for the game’s second world, “Battlefield.” 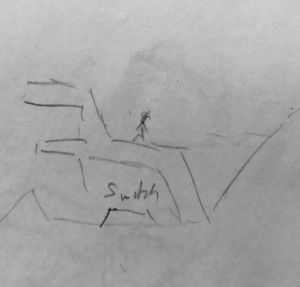 For the PAX East demo, we’d been working on levels from the “Factory” world, to show off a variety of late-game mechanics. When I tried to develop a full set of levels for Factory, I realized it was hard to design them without knowing more about the levels that come before them.

The Battlefield world is the second one in the game, and I’m finding it a lot easier to develop ideas for it. Last year I sketched an idea for the architecture in this world – a simple angled structure – and I’ve found it to be easily adapted to a variety of level structures.

Here are early versions of the first five Battlefield worlds. Hope you like them.

Here’s a new factory level, with refinements to lasers, flames, and robot arms.

Lasers can now target items on the conveyor belt, creating a different movement pattern for players to avoid than pistons. Fire can also “target” items, and robot arms have real art courtesy of Ian. Also added is the first key-and-lock door, to give players a way to skip past parts of the level once they’ve cleared them out.

This is the hardest level I’ve made so far, intended for near the end of the game. But some of the passages may be too narrow? That’s the sort of thing that will be reviewed and revised during playtesting.

After all the hustling we did for PAX East, I had to catch up on some other life responsibilities, but I’ve been working on more tools to flesh out our Factory levels.

Conveyor belts are a fun component of that world, and I’ve been looking for a way to chain them together into a full assembly-line like experience. One way that seems promising is to turn the robot arm prototype into a tool to move objects from one conveyor belt to another. Here’s the current prototype, in progress.

What’s interesting about the Factory level is that it’s the first place where I’ve built objects that react to something other than the player. It helps create the sense of a living world, but it creates new challenges. (The arms started dropping packages just after I cut the video.) It’ll be fun to see where it leads.

UPDATE: Fixed some bugs, and smoothed some animations. To be honest, I’ll miss the spinning wrists…

Thanks for checking out the progress video!

I wanted to share the progress we’re making on our Factory world. This is a snippet of the in-progress level we just showed at PAX East. (If you haven’t seen the video of our talk, check it out here!)

The art is mostly placeholder material, used to inspire Ian later on, and the music is a rough form of a new track by inter:sect, who’s providing music for the entire game.

Finally, this level is from later in the game, so it’s designed to be a little tougher. As you’ll see, I’m still learning to master it myself!

What do you think? Leave a comment and let us know!

Our panel from PAX East 2018 is up on YouTube! If you’re interested in how Ian and I approached making a video game together, and what I’ve learned from the experience, check this out!